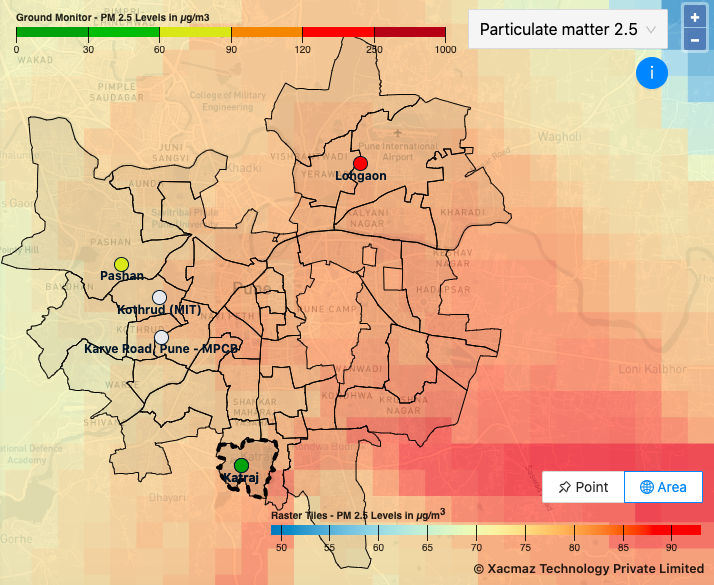 Unless you live in Delhi or Mumbai, chances are your city has only a limited air quality monitors. A joint effort by Parisar and Blue Sky Analytics is fixing that using satellite imagery.

Every year by the end of September, as the remnants of the monsoon rains and storms fade away, air quality across India starts dipping. As Diwali approaches and the winter season closes in, the most vulnerable people -- asthmatics and people with respiratory conditions start feeling the change in the first. By December as smog locks in most Northern cities, schools start shutting, followed with emergency bans on cars and factories and promises of doing better next year are announced.

During this time, many news reports show Delhi’s toxic-grey air and its residents wheezing to work, school and play. Delhi’s gas chamber-like air quality is very visible and so it gets more news coverage than other cities. But the disturbing fact is that 18 of the world’s most polluted cities in terms of air quality are in India.

Pune, Maharashtra, home to about 7 million people, faces the problem of bad air too. The city has grown rapidly in the past decade and as it grew levels of fine particulate matter (PM2.5) ballooned. However compared to bigger cities like Delhi and Mumbai, Pune still has only a handful of air quality monitors.

This is important because real-time and reliable air quality data lies at the heart of understanding the air pollution problem.

According to the Central Pollution Control Board (CPCB), the city of Pune has three air quality monitors. The Ministry of Earth Science runs another 8 monitors in Pune under the SAFAR (System of Air Quality and Weather Forecasting And Research) programme. While data from these on-ground monitors are vital, they are insufficient for a city as crowded and large as Pune.

For Pune residents that means they are living without the ability to consistently measure and share how they’re directly affected by poor air quality often created by nearby industrial facilities or the traffic infrastructure in their neighbourhoods.

To rectify this situation we at Blue Sky Analytics joined forces with Parisar, a civil society in Pune to provide the most accurate and personalised air quality information to the residents of the city which has earned the nickname, 'Oxford of the East' – owing to its association with the fields of literature, art, theatre, and science as a hub for learning.

Getting a bird’s eye view of the problem

Installing on-ground air monitors are expensive. Also as air quality can vary wildly depending on altitude, wind direction, traffic, moisture and many other variables, on-ground monitors are prone to errors. So, Blue Sky Analytics used its expertise in using satellite imagery to calculate particulate matter concentration to get accurate and real time air quality data.

This platform is completely free and is visualised in easy-to-understand graphics so that anyone with an internet connection can use it. The aim of this partnership was to help the public understand and make lifestyle choices according to pollution levels around them, help policy makers assess the air quality in their municipalities and help highly vulnerable groups like school children, traffic cops and elder folks assess their exposure.

“We had already developed a way to get PM2.5 data at a resolution of 10 square kilometers for India, the challenge was to make it more detailed so that the AQ for a smaller region like Pune could be visualised,” BSA’s data scientist Saheel Ahmed said. This was achieved by using data from European Space Agency’s Sentinel5p satellite data and NASA’s GMAO data.

Getting independent readings for every square kilometer virtually without installing thousands of air quality monitors is a true game changer. This means that any Pune resident can get a personalised reading of air quality immediately around them. Schools and individuals can determine outdoor activities like sports, PT, and media and advocacy groups can use this data to bring about systemic change.

“We started talking to Parisar in March 2019 and work started in earnest in June 2019. The next three months went in scoping, research and designing the dashboard,” BSA’s founder and chief technology officer (CTO) Kshitij Purwar @ said.

On 7 October, 2020, BreeZo’s Pune Dashboard was launched and is currently available for public use at pune.breezo.in.